BACK TO: Quoted in the Media, Rogge Dunn, Sports and Entertainment, TV News Appearances 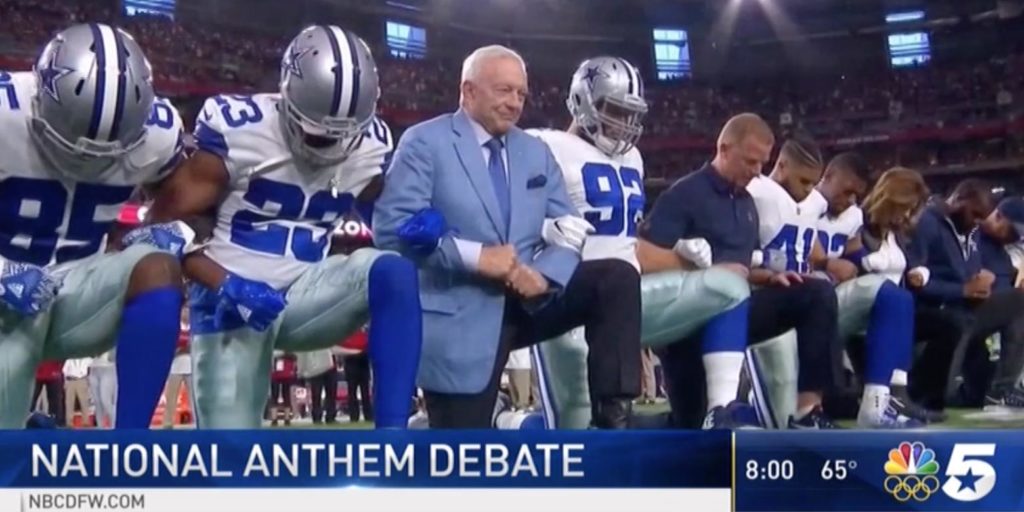 The firestorm continues over Jerry Jones’ remarks that he would bench any player who does not stand during the National Anthem.

Some have praised his stance while others have slammed it as misguided, accusing the Cowboys owner of trampling on his players First Amendment rights.

But legal experts say on this particular matter, the law is on Jones’ side.

“This surprises a lot of people,” said Rogge Dunn, a founding partner of Rogge Dunn Group in Dallas, which specializes in employment and labor law. “But you don’t have free speech rights in your place of private employment.”

Dunn says in a court of law, free speech is only protected when dealing with the government or a public agency. Within a private workplace, employers have the legal right to set standards for their employees, and discipline those who do not abide by them.

“If you have players kneeling, that presents an image that Mr. Jones may or may not want,” said Dunn. “Some of the other [NFL] owners may say that’s an image I do want, and I’m glad that you’re kneeling. But certainly the law allows a business owner to set the tone for how they want their employees to appear in the workplace and in the public.”

Dunn says employees do have a legal protections when it comes to job terms and conditions, which include things like pay and working environment.

But because players across the NFL are kneeling as a form of political protest, he believes it falls outside that scope, which is why he thinks any legal action against Jones, including a recent complaint filed with the National Labor Relations Board, will ultimately fail.

“That’s political speech, not workplace speech,” said Dunn. “What would be interesting is if someone said I’m kneeling in solidarity with Colin Kaepernick, or I’m kneeling because Colin Kaepernick doesn’t have a job and he’s a former employee, then that connects the dots to make it a work related issue. I still think that would be a stretch, but that’s a possibility.”

So far, none of the Cowboys players have taken a knee during the National Anthem.

See the Article in its entirety

Apr. 19, 2021: Rogge Dunn to Speak in Live Webcast on Commercial Litigation Trends, Updates, and Challenges Amidst the COVID-19 Pandemic

Jan. 26, 2021: Rogge Dunn to Speak in LIVE CLE Webcast on Demystifying the Current Landscape of Broker-Dealers Amidst the COVID-19 Pandemic