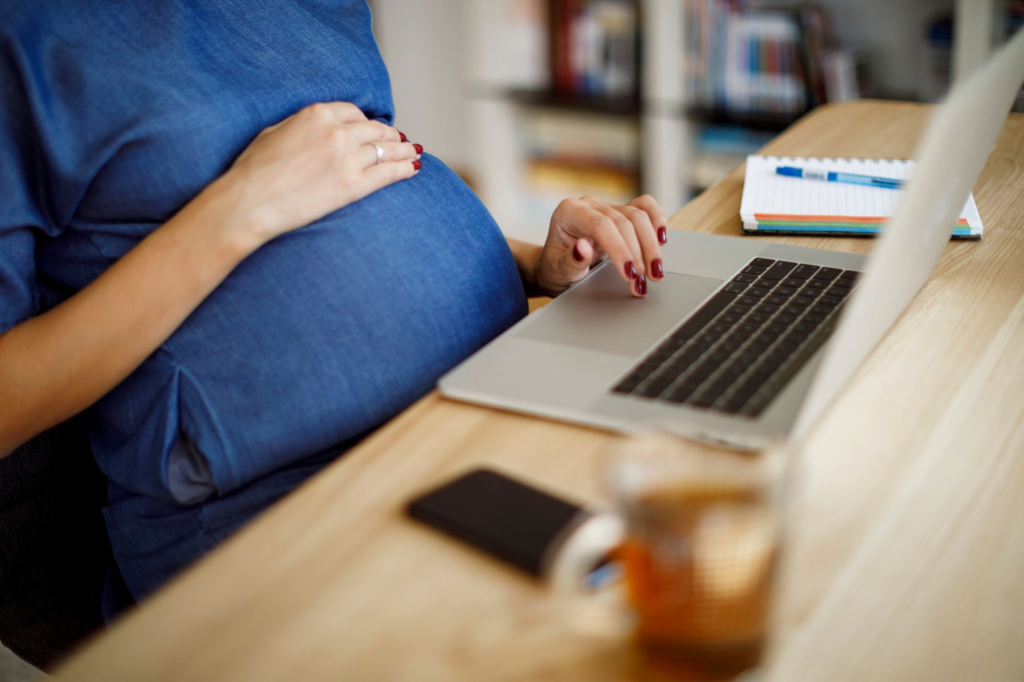 The federal law that prohibits pregnancy discrimination or the PDA, which relies on Title VII’s anti sex discrimination language, affords protection against a number of pregnancy-workplace related issues like harassment, discrimination, and temporary disability. Women are protected from pregnancy harassment based on pregnancy, childbirth, or a medical condition related to pregnancy or childbirth. The standard for the harassment mimics that of workplace sexual harassment employers cannot allow severe or pervasive harassment based on pregnancy.  As such, similar rules about speaking out against and formally complaining about the harassment are useful to win a claim of pregnancy discrimination. Women, and sometimes men, can also be afforded medical leave on disability grounds. If a woman experiences any of the impairments from pregnancy as recognized under the Americans with Disabilities Act (ADA), the PDA then applies ADA standards to that woman’s condition.  The standard is that an employer must make reasonable accommodations, absent undue hardship, for that pregnancy impairment and cannot discriminate based on the disability stemming from the pregnancy.  The PDA and the ADA, like Title VII, are federal laws that apply to only those employers with 15 or more employees.

Pregnancy discrimination is in a bit of a unique category of discrimination in that the perpetrator may be genuinely benevolent, but unaware that the benevolence does not justify discrimination.  Take, for example, a woman with a high-risk pregnancy who works in a somewhat physically demanding workplace that is an assisted living home that supports people with mental disabilities who, at times, will become aggressive towards caregivers. The managers at this workplace decide that the woman with the high-risk pregnancy should not work during the last month or two of her pregnancy and puts her on unpaid, job secured leave in a similar fashion to what the Family Medical Leave Act (“FMLA”) would require. One last fact: consider that the managers have a genuine concern that if the woman continues to work at this home during the final months of her high-risk pregnancy, there is a very real chance that she could lose her baby, but that there is no concern that she can do her job well. Corrine Carter claimed pregnancy discrimination on this fact pattern and won the case in 2017.  In Carter v. A&E Supported Living, Inc., the Court held that the manager’s actions were prima facie evidence of pregnancy discrimination.  That Court also explicitly noted that “benevolent concern for the health and safety of Carter and her unborn child does not excuse the discriminatory nature of [A&E’s] actions.” Carter v. A&E Supported Living, Inc., 16-00574-N, 2017 WL 5894540 (Nov. 9, 2017).

If a pregnant employee wants to seek reasonable accommodations, they and the employer must then engage in what is known as the interactive process. The interactive process relies on the requirements laid out in the ADA to prevent pregnancy discrimination.  Pregnancy is not, however, a disability in and of itself because it alone is not an impairment; however, complications and impediments that arise from pregnancy are able to be classified as a temporary disability for purposes of the ADA. If there are complications or other issues that lead to a pregnant woman needing reasonable disability accommodations then that woman should make a request for those accommodations. Employers are then obligated to oblige those accommodations so long as they are reasonable and do not create undue hardship and the employer offers accommodations to other employees with temporary disabilities.

Employment lawyers understand how these laws have changed over time. One of the best examples on how this issue has changed over time is Young v. United Parcel Service.  575 U.S. 206 (2015). Young was a UPS worker who could no longer lift over 20 pounds due to her pregnancy and even though UPS would not accommodate this lower lifting capability; the Court remanded on the basis that the law has evolved to the point where yes, a plaintiff can bring a disparate treatment claim under the PDA.

Today there are a number of avenues for women to gain reasonable accommodations relating to disabilities and other issues that may impede their working life, which is why it is important to contact employment lawyers about your rights. The most prominent law is the ADA, but there are other methods as well. Take lactation as an example; it is not covered as a disability under the ADA but the Affordable Care Act amended section 7 of the Fair Labor Standards Act to ensure that employers offer a break and a private place (not a bathroom) for working mothers that need to express milk during the workday. There are also a number of other state laws recognizing that pregnant women and recent mothers still have needs not covered by the ADA. The FMLA, however, does consider pregnancy to be a Serious Medical Condition and, thus, makes 12 weeks unpaid leave available to eligible pregnant women.

Employment lawyers understand how the PDA and the ADA can work together on issues, but they can also be used separately for the same cause of action. Take two examples; in the first a boss fires an employee who has recently revealed she is pregnant and in the second a boss fires an employee already known to be pregnant because she cannot do something without a reasonable accommodation by the employer.  The first scenario relies on the PDA but cannot use the ADA and the second relies on the ADA but does not implicate the PDA.  In many ways, the two work to close any discrimination loopholes left open by the timing of the pregnancy discrimination.

The ADA does not recognize pregnancy as a disability but does recognize things like anemia, sciatica, gestational diabetes, preeclampsia, morning sickness, swelling in the legs, and depression, amongst other impairments, as temporary disabilities. As such, pregnant employees will be entitled to all the protections and rights as other employees would under the ADA. Its important to consult employment lawyers about these rights. Women are entitled to reasonable accommodation, absent undue hardship on the employer, for any impairments related to their pregnancy. So, for a woman with morning sickness an employer may be able to reasonably accommodate that disability by changing their working hours. An employer may also modify workplace policies such as allowing a pregnant woman to sit frequently or carry a water bottle even though non-disabled employees are not allowed to do or have those things.  Even redistributing various work-related responsibilities, such as heavy lifting or being exposed to possibly toxic materials, can be covered as a reasonable accommodation without actually modifying someone’s employment terms.

Miscarriages can also be covered under the ADA so long as it substantially limits a major life activity. Many miscarriages, however, do not meet this definition unless they are particularly severe or have long-lasting effects. They are, however, a pregnancy-related condition and, therefore, can qualify under the PDA if an employer were to discriminate against a woman who had a miscarriage. Depression and other medical conditions stemming from a miscarriage may bring in the ADA or the FMLA and may grant any number of remedies such as reasonable accommodations or unpaid, job-protected leave under the FMLA. So, while the text of the PDA is largely wrapped up in the actual pregnancy, the end of pregnancy is also protected. To properly understand these protections, it can help to consult employment lawyers. Miscarriages have already been addressed, but there are a number of cases, including in the 5th Circuit, which argued that abortions are a medical ‘condition’ relating to pregnancy and, thus, covered by the PDA.  Even in instances of successful pregnancy and childbirth some women suffer from postpartum depression. Postpartum depression is a protected category under both the ADA and the PDA, employers cannot discriminate against women suffering from it and must reasonably accommodate them. In some cases, women may even qualify under the FMLA if the depression is serious enough and if their FMLA time has not already expired due to other leaves during the course of pregnancy and childbirth.

Men are, unsurprisingly, ineligible for protection under the PDA. However, if a man were to have a very sick or otherwise incapacitated pregnant partner/wife, they may be eligible for 12 weeks unpaid leave because of the FMLA. Men (and, assumingly, other spouses) may take leave to care for a pregnant woman before and immediately after she gives birth. While some state laws may offer greater opportunities for those partners to take leave, the FMLA permits leave only when the pregnant woman has Serious Health Concerns. These serious concerns, as relating to pregnancy, mostly focus on ‘severe’ pregnancy symptoms that cause overnight hospitalization or continuing treatment. So, extreme morning sickness, for example, could be a Serious Health Concern that may qualify a partner for FMLA unpaid leave. After pregnancy, fathers can more easily be granted FMLA leave.

Three Laws Recap and their Timing

Employment lawyers understand the sweeping nature of the Pregnancy Discrimination Act. The PDA can be used before, during, and after pregnancy to prevent discrimination based on the pregnancy or any conditions associated with it. We have already posted a blog on pre-pregnancy rights here, and we will be posting another on post-pregnancy rights in the near future. The FMLA and the ADA largely mirror a parent’s rights during pregnancy and after. The FMLA can be used during or after a pregnancy and grants a total of 12 weeks unpaid, job secured leave; both parents are eligible for both times but non-pregnant partners may only use FMLA leave during a pregnancy if the pregnant woman is severely injured or incapacitated by the pregnancy.  The ADA can be used during and after pregnancy to help prevent discrimination based on the ailments associated with pregnancy and also to ensure that women are reasonably accommodated at their workplace for those ailments. If you are pregnant, or your partner has some pregnancy related condition that requires your attention, you may be covered under one of these laws; speak to one of our employment lawyers today if you feel that your rights are being threatened because of a pregnancy or are experiencing pregnancy discrimination.