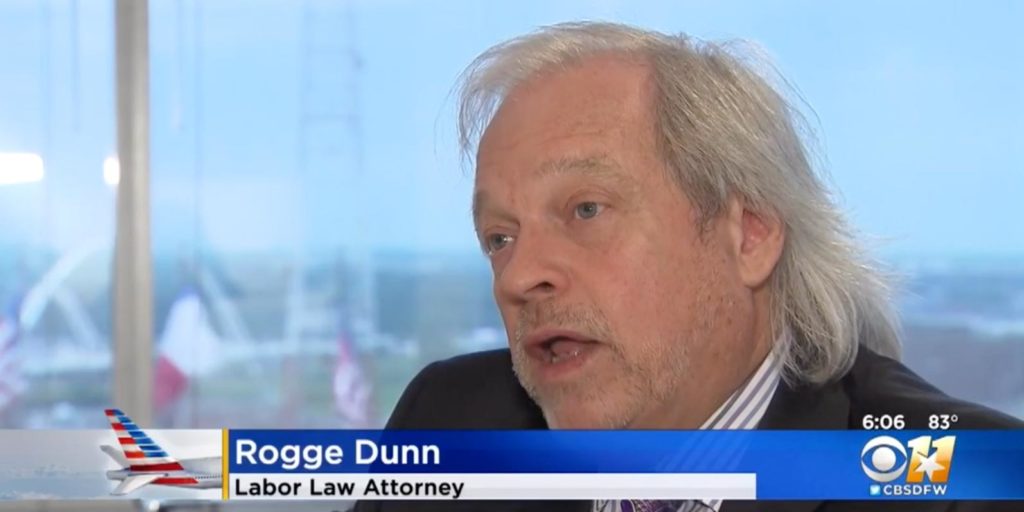 Rogge Dunn was featured during a CBS 11 story covering the emerging lawsuit between American Airlines and its mechanics union. Watch the news segment below, or click here to see the story on CBS 11.

The article on CBS 11 reads:

FORT WORTH (CBSDFW.COM) – Fort Worth-based American Airlines has filed a lawsuit against its mechanics unions, accusing them of an illegal slowdown campaign. The airline is asking a federal judge to order the unions to stop.

In its complaint, the airline says between February and May 13, the unions’ actions have caused 644 flight cancellations and 270 maintenance delays two hours or longer.

The airline says that affected 125,000 customers, and warns an additional 3,400 passengers each day could be impacted.

In a statement, the Transport Workers Union of America and the International Association of Machinists and Aerospace Workers and the TWU/IAM deny wrongdoing. “Allegations of a slowdown are unfounded. This is an intimidation tactic by AA because the union is fighting back against their efforts to offshore thousands of solid blue collar jet mechanics jobs into South America…”

The union says members have worked without a new contract for nearly three and a half months. “We are also standing strong against cuts to our medical benefits and retirement security. The Association is ready and willing to get back to the bargaining table at any time.”

When asked who has the upper hand, Rogge Dunn, a labor law attorney in Dallas said, “I tend to think in these situations, the union has the upper hand because the damages are so significant. In other words, if they continue the slow down, it can cripple an airline.”

The lawsuit comes as the airline is entering its busy summer travel season.

Dunn explains what the judge will have to consider. “The judge wants to look at whether or not the slow down was legitimate or whether it was a planned en-masse action by the union to gain leverage over their employer.”

American’s customers say they don’t want to be delayed by maintenance issues — unless the plane has a serious mechanical issue.

Shelby Timothy says, “It’s a huge concern especially if you have connecting flights or if you have right when you get in, you have something that’s scheduled.”

Another passenger, Erik Aguayo says, “It needs to be efficient and make things better for the people who are ultimately paying for it: paying for those flights and it’s the passengers.”

The FAA says any time there’s tension between labor and management, it steps up oversight of the airline’s maintenance.

Compliance Insight From a Lawyer for Financial Advisors